babbled by Murni Alfathunnisa at 1:34 PM No comments: 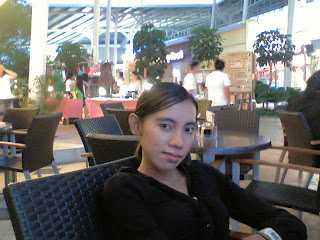 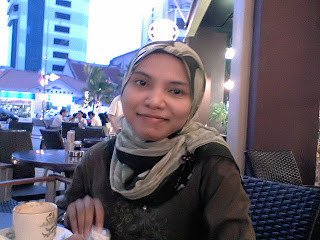 Relaxing..after tiring days at work. Me and my sis spent our saturday evening at Oldtown, New World Park. Weekend is the only time for us to get-together and have a "girls chat". After a cup of hazelnut white coffee and some noodles, later around 8, we left the city and heads to the famous Night Market in Batu Ferringhi.

With the same intentions like any other local visitors, we just try our luck to look for latest blockbuster DVD's. Unfortunately, we return with dissapointment. This is my 3rd time visit and its worth it even you have to walk in a very long strech.

A massive traffic jams begins from Gurney Drive junctions up to the Esplanade..due to this fireworks. I only managed to capture this.. 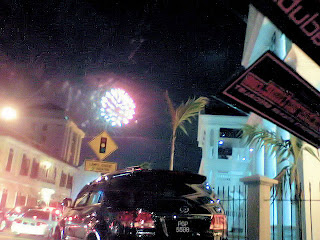 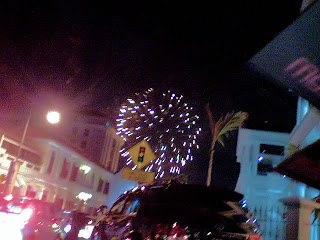 Tomorrow going to be a lazy day at home...
babbled by Murni Alfathunnisa at 1:49 PM No comments:

Today is The birthday of the Yang Di Pertua Negeri P.Pinang. So, it's public holiday here. Boring duduk kat umah and do nothing, so, by lunch time me and dik na went for shopping at Carrefour. As usual, I'm the one who plans to shop and the one ended grabbing like almost everything she wants is my sis. Unfortunately, I'm the one who fork out the money. Dik na punya excuse, tak sempat withdraw cash from ATM. Co-incidence, there is 'Thai Fair', dik na dah start rambang mata bila tengok all those skirts with cheaper price. 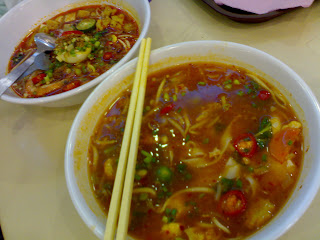 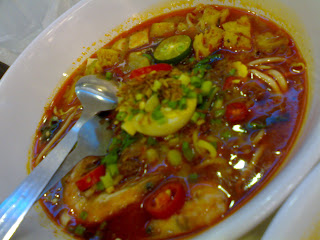 babbled by Murni Alfathunnisa at 12:38 PM No comments:

Email ThisBlogThis!Share to TwitterShare to FacebookShare to Pinterest
Labels: holiday 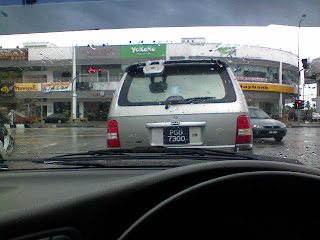 I was at Guardian. Looking for my personal toiletries and incidentally met one of my old friend there. We have a short chat and I proceed to my car. "The office" calls up and informed one of panel solicitor will come over and bring some 'lunch treat' for all staff. Waa..makan free again! Luckily I did not tapau anything..haha! See..makan again. Hopefully, by this way I would be able to put on weight!
babbled by Murni Alfathunnisa at 8:55 PM No comments: 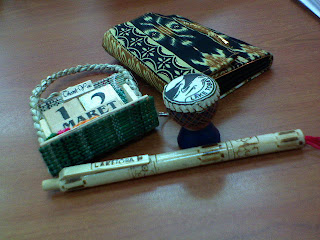 This souvenir.. a gift from friend, Pn. Nor who went for holiday trip in Medan last week.
Thanks ya!

babbled by Murni Alfathunnisa at 1:25 PM No comments:

Sundry shop nearby our office sells these lovely durian, fresh from the tauke farm in Balik Pulau. And guess what, we had our small durian party today. See the yellow flesh..so marvellous! RM 4.90 per kg and it's worth it. 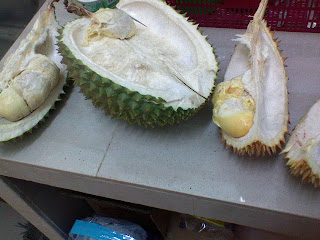 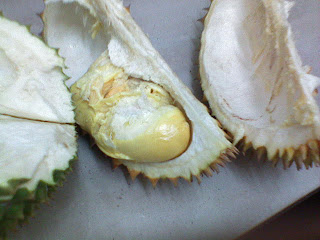 I'm not sure what will happen tomorrow soon after my boss enter the office. One thing for sure, he could smell the new variant of air freshener in the whole office and sense that the 'durian fever' is back! Just wait for complaint list tomorrow..hehe!
babbled by Murni Alfathunnisa at 8:28 PM No comments:

Email ThisBlogThis!Share to TwitterShare to FacebookShare to Pinterest
Labels: foods of the earth

I just can't think of something nice to say about someone. Beginning of the day I managed to say nothing instead of being critical. But it became more tough for me to verbalize -- and proven, it's not a good day to speak my mind. Dah berjaya mendiamkan one of my office mate. Rasa bersalah kerana tak puas hati tu dilepaskan to the wrong person. I'm just tired being responsible in everything for NOTHING.

Late in the evening, my former manager, Mr Wong, call me up. Just bertanya khabar and get some updates of the office. What I could say is "nothing much difference..i'm still me. I do all the works, without assistance. People come, people go..including you. And I'm still stuck in my own cubicle. "

At least, he brings smile to my day. Mengenangkan dia yang friendly, a very concern person and generous..selalu belanja staff. After he left company, no more 'makan-makan', haha! Eventhough, ada sikit perangai 'ulat bulu' and sometimes too much talking which is annoying, I still respect him as my former manager. After a quite long conversation over the phone with him, I feel much better. And hopefully, tomorrow would be no more emotional issues arise. I will try my best to maintain positive thoughts, as much as I can.
babbled by Murni Alfathunnisa at 9:17 PM No comments:

I did the work..someone get the credits! So annoyed!

Since I'm working with a power player right now, but guess what? She could say the same of me.
It has been a very long time ago that I am aware that I have to step into that role with more confidence. But what happens yesterdays finally ruins my self-confidence. Unsure with my work position and unsure whether my performance has been well-accepted, well-appreciated by the top management. This 'silent competition' at work has made me feel uncomfortable.

Here I am today..still the one running around to get things work..but the promotions goes to others!

It's been so long..and I think it's time to look for another career advancement.
babbled by Murni Alfathunnisa at 7:36 PM No comments:

Welcome to the club..

I read theirs too...